Kappa Phi Lambda was founded on March 9, 1995 at Binghamton University by seven founding mothers. These inspirational women – Elizabeth Choi, Karen Eng, Rei Hirasawa, Hee Cho Moon, Chae Yoo, Samantha Somchanhmavong, and Connie Yang – united with a single vision of providing women with the chance to use their pride in heritage to become leaders of society. There was a need for an organization of this kind that would give inspiration and education to its community, and thus, Kappa Phi Lambda was born. 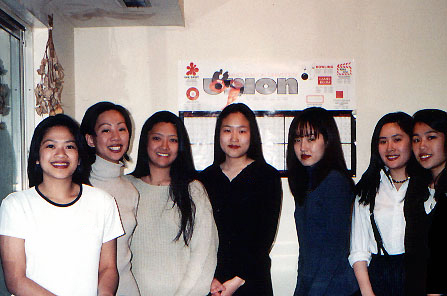 The founding mothers envisioned themselves laying the cornerstones of what was to become a unique and revolutionary organization. They taught each other about strength and ambition while discovering their own true identities in the process. This sorority would unite young women of diverse heritages and encourage them to make use of their strong voices and thoughts. This sorority is open to women of all nationalities and backgrounds who want to learn about and actively represent Pan-Asian culture.

The founding mothers not only channeled Asian American awareness through voice, but also through action. These first sisters of Kappa Phi Lambda extended their hands to the community through charitable actions. By contributing their time and funds, they were able to make a powerful impact on the world around them.

Since its founding, Kappa Phi Lambda has since become one of the fastest growing and strongest Asian American interest sororities in the nation. Today, well over a decade after the founding mothers established Kappa Phi Lambda, the sorority has grown to a total of 28 locations. All sisters nationwide abide by the mission set forth by our founding mothers, but each school is also unique in its own right. This is symbolic of the women we seek: unique, intelligent leaders who want to make a difference. Several years ago, seven beautiful women lit the fire that is Kappa Phi Lambda and watched it grow. As our sisterhood expands, that fire now burns brightly within every individual sister, carrying with it the vision that our founding mothers conceived.